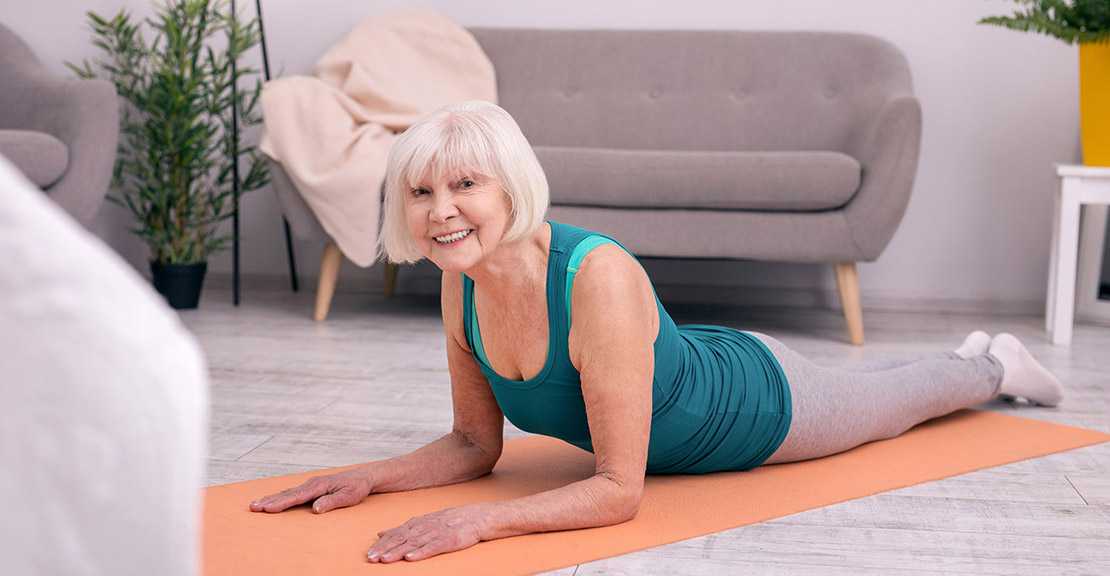 In today's popular culture, fitness means different things according to the age group. For the youth, fitness is primarily about aesthetic pursuit. An average youth may not be concerned about fitness at all, but looking good when they do. Some focus on functional fitness, which brought about the concept of "functional movement" as introduced to us in the previous decade.

But the functional fitness approach also seems inadequate because it does not emphasize the other essential aspects of fitness such as emotional health, self-introspection, and personal relationships. This inadequacy makes the definition of fitness for seniors slightly different.

Seniors are more particular about physical fitness methodologies that appreciate the individual as a whole, complex being, and focus more on the quality of life and overall health. Here is where yoga for seniors becomes handy.

It is no surprise that yoga for the elderly has become increasingly popular in recent times. A 2016 yoga study showed how nearly 14 million seniors in America adopted various yoga sequences. That’s a significant increase from the four million who practiced yoga in 2012. However, 14 million aged citizens are still far from the total number that could practice simple yoga.

Benefits of Yoga for Seniors

The fact that yoga is not a rigorous physical exercise answers whether yoga is safe for seniors and eradicates the fear of injury. There are indeed yoga practices that are physically demanding. However, there is also gentle yoga for the elderly.

Yoga affords the flexibility to adapt your practice to meet your needs. Therefore, the only question that probably remains unanswered or unclear is; what are the benefits of yoga for seniors?

You probably know some of the benefits of yoga already. However, you might need some clarity about its advantages when it comes to older adults practicing yoga. Find some of the yoga benefits for the elderly below:

Best Types of Yoga for Seniors

Now, it’s apparent yoga has significant benefits that it offers senior citizens. But, what’s the best type of yoga poses for seniors? There are dozens of different yoga poses, and not all are suitable for older people, especially beginners. So, what type of yoga should the elderly practice?

The quick answer to the question is that the elderly, especially those just starting yoga practice, should start with simple, easy, flexible, and gentle yoga poses. The critical consideration in choosing yoga to practice is the elderly yogi’s fitness level and physical condition.

However, here is a list containing some of the best and easy yoga poses for seniors:

That it’s called basic does not mean it is easy because yoga poses are meant to challenge your body and mind. Even if basic yoga for the elderly involves simple moves, a lot is going on metabolically. You can try out these basic yoga poses for beginners who are senior citizens: 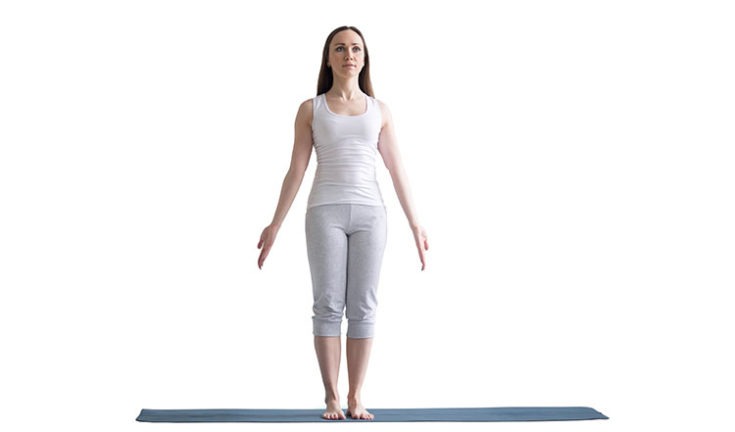 ‘Tada’ = mountain, ‘Sama’ = Upright or straight and ‘Sthiti’ = standing still. Tadasana therefore implies a pose where one stands firm and erect as a mountain. Tadasana (Mountain Pose) is considered as a basic standing pose or the foundation pose for any other yoga pose (asana). E.g., Sun Salutation series starts and ends with Tadasana or otherwise called Samasthiti. Mastery over this asana with firmness of the feet, toes and the shoulders and chest will benefit in the practice of all other yoga poses. Mountain Pose is considered a base pose as mountain pose variations can be derived from this pose.Mountain Pose is considered a warm-up yoga pose to prepare the body for more intense yoga poses / yoga flows. 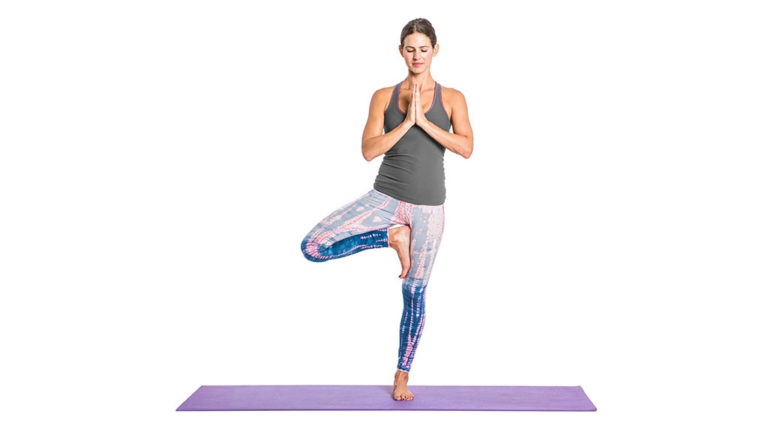 Tree Pose
'Vrksa' means 'Tree' and hence Vrksasana means 'Tree Pose'. The very name suggests the body in the final pose should look like a tree. A tree stands tall, strong and straight. Tree Pose (Vrksasana) comes under the standing poses and balancing poses in yoga. Tree Pose is considered a base pose as tree pose variations can be derived from this pose.Tree Pose helps boost energy in the body and hence can be included in flow yoga sequences.
Step-by-Step Instructions 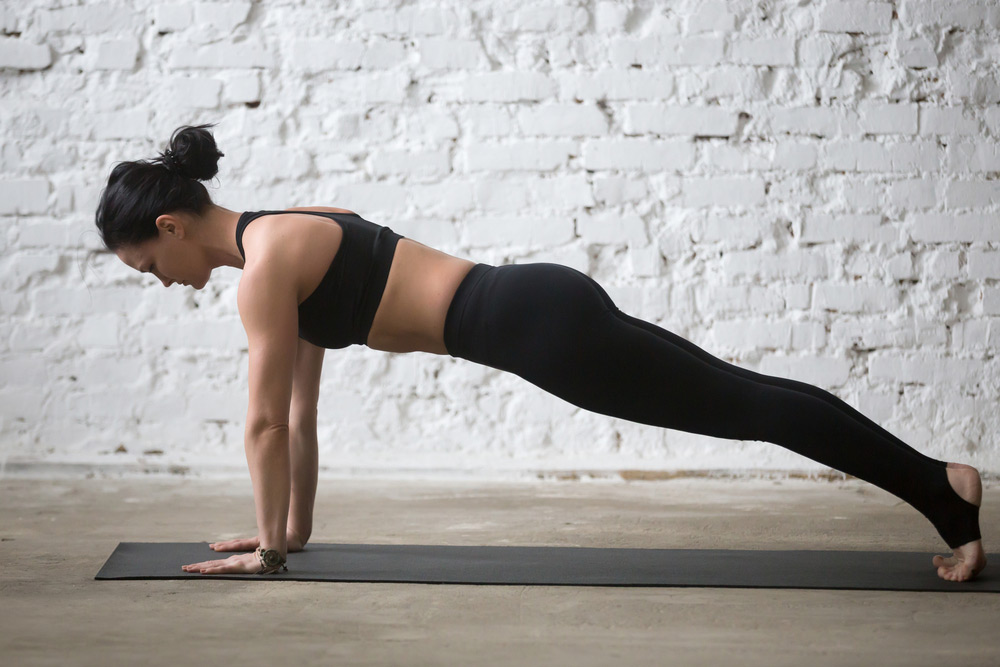 Plank Pose
Plank Pose (Phalakasana), as the name suggests, the body is held in a way that looks like a plank, thin and long. In Plank Pose a lot of emphasis is on the muscles at the core and the shoulders. This pose essentially works for someone who wants to take the arms and shoulder strength to the next level in order to do more difficult arm balancing yoga poses. Plank Pose is considered a base pose as plank pose variations can be derived from this pose.Plank Pose helps boost energy in the body and hence can be included in flow yoga sequences.
Step-by-Step Instructions

Child Pose
In Sanskrit ‘Bala’ , means ‘child’. Balasana or Child’s Pose, is generally practiced at the end of an intense yoga sequence wherein the connection of the breath and the movement of the body would have been lost. With the practice of Balasana concluding such a sequence, it allows one to come to peace with the body with the connection of the breath. No doubt all yoga poses should lead to the connection of the breath and the body, but certain poses are challenging where the chest and the abdomen are compressed or pulled, creating uneasiness with the breathing. With Balasana, the spine remains relaxed in forward fold and forces one to focus on the breathing with the compressing of the abdomen and the chest towards the tummy. On the other hand Balasana can be used purely as a restorative pose to heal patients with severe backaches, insomnia, treating blood pressure or just simply bringing the stress levels down. Child Pose is considered a base pose as child pose variations can be derived from this pose.Child Pose helps boost energy in the body and hence can be included in flow yoga sequences.Child Pose is considered a warm-up yoga pose to prepare the body for more intense yoga poses / yoga flows.
Step-by-Step Instructions

Simple Yoga Sequence Every Senior Can Do

You are not too old to begin to practice yoga. You only need to find the yoga sequence that matches your physical ability and fitness level. Here is a yoga sequence for seniors you can take up as an evening or morning yoga for seniors:

Leg Up on the Wall

Is Yoga Good for Seniors?

Yes, yoga is good for the quality of life and the overall health of seniors. Some of the benefits yoga offers to include:

Pilates vs. yoga for seniors, which is better?

Both are good for seniors; however, they each have the function they perform. Yoga helps to improve your flexibility, deepen your meditation, and help with your balance. Pilates, on the other hand, works better for improving posture, recovering from injury, and developing core strength.

What type of yoga is best for seniors?

What exercise should seniors avoid?

As a senior, you should avoid the kind of exercise that will put an unhealthy strain on your body causing joint pain, posture problems, atrophied muscles, and other unpleasant physical conditions. Examples of activity to avoid include: 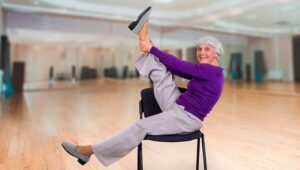 As we grow older, our bodies begin to experience more pains and niggles. With muscle...