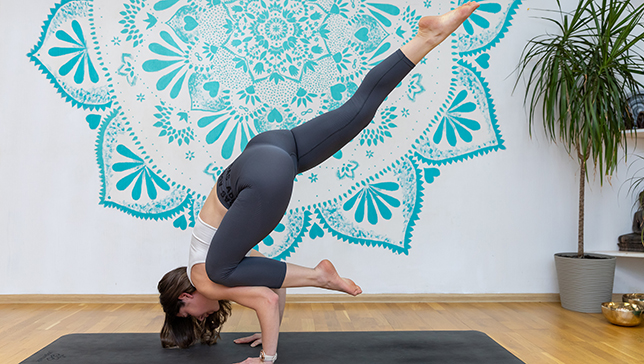 Flying Crow Pose or Eka Pada Bakasana is an asymmetrical arm-balancing asana and part of the primary series of Ashtanga yoga.

Eka pada bakasana is derived from the Sanskrit eka meaning “one,” pada meaning “foot,” baka, meaning “crane,” and asana, meaning “pose.” Therefore, it may also be referred to as one-legged crane pose in English. It is also sometimes referred to as one-legged crow pose (Eka Pada Kakasana); however, in the crow variation, the arms are bent, while in the crane variation, the arms are straight.

Step 1
Begin by coming into Bakasana, your palms are placed at the shoulder-distance apart. There is a gap in between the fingers and the knees are placed behind the upper arms while the gaze shifted to the forwarding direction.
Step 2
As you reach the final of Bakasana, prepare the upper body to experience a weight change. By gripping the floor tighter and the forearms firmer than before along with a slight inward movement of elbows.
Step 3
Now, gradually shift your weight more on the right arm and then, lift off the left leg from its position towards the middle of the torso. After that, extend your leg in the air. The gaze remains in the middle of the forwarding direction.
Step 4
This is the final position of the Eka Pada Bakasana. Hold here for as long as it is comfortable without straining. Then return slowly by bending and bringing the left leg closer to the middle torso.
Step 5
Now, rest it on the back of the left upper arm by stabilizing the shoulder and forearms. Finally, into the Bakasana and then repeat the same asana with the left arm also. Ultimately, into the Bakasana and then release it as well to relax the body.

Wrist, shoulder, or lower back injuries 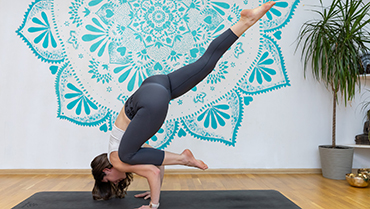 There are a number of variations to lighten or extend this pose. As a beginner, you may use a bolster between your hands or a block underneath your feet. In case, you are an advanced practitioner, with each exhale try to bring your back leg higher. Also, bringing the forearm of your free arm to your mat will bring you a new challenge to perform this pose.