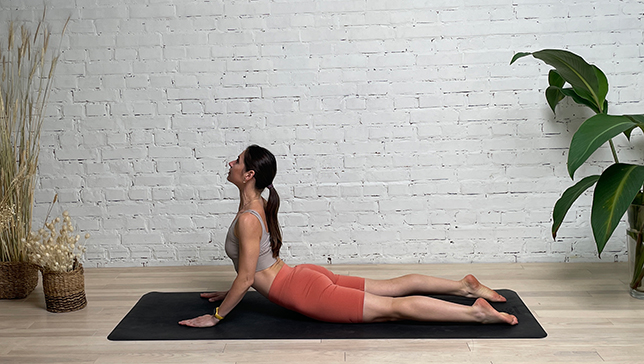 In Bhujangasana (Cobra Pose), as the name suggests, the body resembles a serpent with its hood raised. This yoga pose is considered a very powerful backward bending yoga pose in Hatha Yoga. Cobra pose comes under the category of ‘lying down on the stomach’ yoga poses.

Cobra Pose is considered a base pose as cobra pose variations can be derived from this pose. Cobra Pose helps boost energy in the body and hence can be included in flow yoga sequences.

Step 1
Start by lying belly-down. The arms are along side the body and the legs hips distance apart and extended behind you. Tops of the feet are on the earth.
Step 2
Place your hands, with the fingers spread wide next to your lower ribs. Your fingertips should be inline with your nipples.
Step 3
Elbows are directly above your wrists and are hugging the ribcage. Fingertips are inline with your nipples.
Step 4
Engage your belly by gently drawing the navel in and up towards the spine.
Step 5
On an inhale, keep the core engagement as you peel the chest off the earth. Keep your lower ribs on the earth as you firmly root down through the pubic bone, thighs and the tops of the feet. The hands should have almost no weight in them as the lower body and core engagement should keep you in proper alignment.
Step 6
Draw the shoulders away from the ears, broaden the collarbones and shine the heart. The backbend is initiated in the thoracic spine (in the back of your heart). Be mindful not to dump into your lower back or over arch your lower spine.
Step 7
Your gaze is forward or upward but make sure not to crunch the neck.
Step 8
To get out of the posture gently lower yourself back down to the earth

Opens the heart and lungs 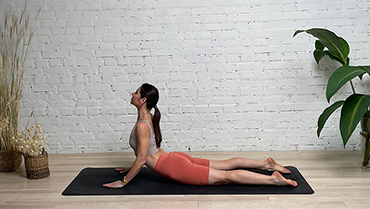 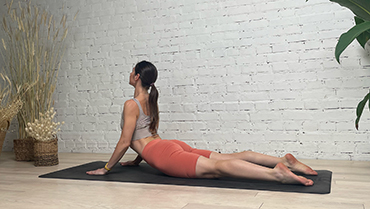