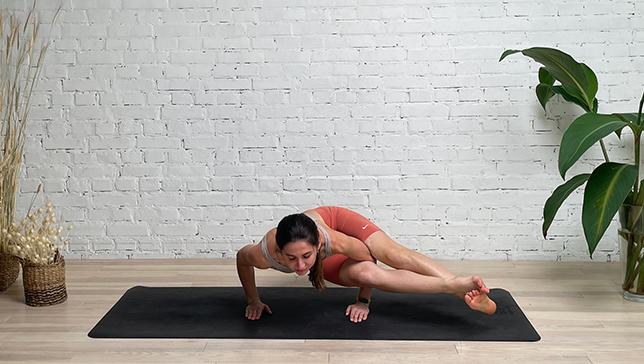 Astavakrasana ( Eight Angle Pose) is an advanced practice forming part of the advanced arm balance sequences, and core strengthening sequences. The practice mainly to build strength and flexibility, at a higher level it helps in maintaining stability and balance, and also helps the practitioner to come out of his physical and mental limitations.

Astavakrasana (Eight Angle Pose) is derived from the Sanskrit words, “asta” meaning eight, “vakra” meaning curved or bent. In Hindu mythology, Astavakra was the spiritual guru of King Janaka of Mithila. When Astavakra was in his mother’s womb, his father Kagola made several mistakes while reciting the vedas . Hearing this, the unborn child laughed in his mother’s womb. The father Kagola, got enraged and cursed his son to be born crooked. As a result, his son was born twisted at 8 places (chest, neck, feet, hands, and knees), and was thus named Astavakra. Despite being crippled, he overlooked his physical body and became a great Guru to King Janaka (who is the father of Sita), a great king himself.

Step 1
Start sitting cross legged. Bring your right shin so it's parallel to the floor. Take hold of either side of your right foot and draw your right knee back towards the wall behind you.
Step 2
Take your right arm underneath your right shin, then take a couple of goes to get that leg as high up on your arm as you can. Squeeze your right leg into your right arm strongly, otherwise it'll slide down when you move your hands. Place your hands on the floor either side of you.
Step 3
Lift your left leg and hook your left ankle on top of your right. Squeeze your legs tightly together on to your arm.
Step 4
Keep your elbows stacked over your wrists, but bend your elbows so that your chest moves forward and your hips slide back. If sliding your hips back while on your sticky mat is difficult, trying coming off your mat on to a more slippery surface like a wooden floor. Squeeze your legs together at the same as extending them away from you.
Step 5
Engage your core muscles. Keep your elbows bent and chest but lift your hips off the floor, while squeezing your legs together and lengthening them away from you (tip: elbows must bend- don't try and pick yourself up by straightening your arms!)

Strengthens the wrists, arms and shoulders

Helps supply blood to the spine and eliminate toxins.

Work up to Eka Hasta Bhujasana. You must be able to lift your whole body up before continuing. It may help to place blocks under your hands to press into and assist in lifting your body.

Keep the upper and lower spine lifted through the crown and firm your abdominals.

Squeeze the thighs together and press through the feet to extend the legs. Keep the palms active.

Be careful not to overstretch the shoulder joint by letting your chest sink through the arms.

Be cautious of your low spine and release if you feel any strain or tension while rotating or lifting.