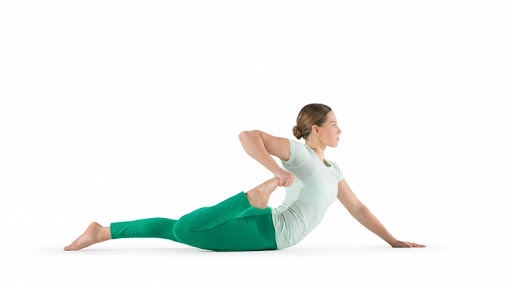 Half Frog Pose (Ardha Bhekasana) is a beginner level, hip and back stretch yoga pose to provide strength to hips, feet, knees, chest, neck, and the back. The name begins with half or ardha due to its asymmetric behavior which means only one leg is stretched. The practice of Half Frog Pose is highly effective on the lower back and forming part of the backbend yoga sequence, this pose also helps to open the chest acting as a heart opener too.

The pose can be included in daily yoga especially for corporate workers, runners, swimmers, or for complete body flexibility. Half Frog Pose prepares the hips, legs, and shoulders for other deep backbend poses like Frog Pose and Bow Pose. Half Frog Pose can be included in Vinyasa Yoga Sequences to strengthen the hips, knees, and ankles for further advanced poses or can be practiced as cooling or counterpose, post the practice of intense hip openers. The pose also has a great effect on the arms including biceps and triceps muscles.

Step 1
Lie on your back with forearms on the floor and lifted head and chest.
Step 2
Flex the right knee to bring the heel towards the corresponding buttock.
Step 3
Pressing the left forearm to the floor reach back with your right hand to clasp the raised foot.
Step 4
Gently sliding the fingers towards the toes rotate the elbow up to the ceiling.
Step 5
Curling the fingers on top of the toes press the foot towards the hip.
Step 6
Inhale raising the chest and exhale pressing the foot towards the floor to deepen the pose.
Step 7
Inhale lift the left elbow pressing the left hand to the floor.
Step 8
Keep looking down and hold the pose with normal breathing.
Step 9
Maintain the pose for at least five breaths to 60 seconds.
Step 10
Exhale releasing the hand and feet and repeat it to the opposite side.

Stretches the entire front of the body, ankles, thighs and groins, abdomen and chest, and throat, and deep hip flexors (psoas)

Strengthens the back muscles

Stimulates the organs of the abdomen

Low back, neck or shoulder injuries