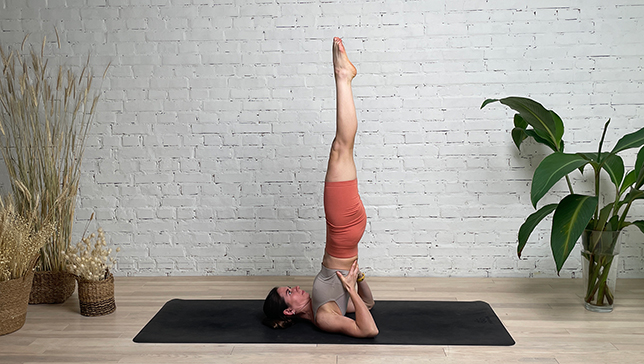 Sarvangasana has three words in it: ‘Sarva’ meaning ‘Entire’, ‘Anga’ meaning ‘Body part’ and ‘Asana’ meaning ‘Pose’. This translates to ‘All Body Parts Pose’. Sarvangasana also known as Shoulderstand Pose is called the “Mother of all Yoga Poses” because it benefits the entire body and also mind. Sarvangasana (Shoulderstand Pose) can be categorized under intermediate level yoga poses. To practice this asana, yoga practitioner should have some level of comfort with various yoga poses in the intermediate level. As the entire body is balanced on the upper shoulders this pose is also called ‘Kandrasana’ or ‘Shoulderstand Pose’.

Sarvangasana is considered a base pose as sarvangasana variations can be derived from this pose.Sarvangasana helps boost energy in the body and hence can be included in flow yoga sequences.

Step 1
Exhaling, raise high the legs together enough to make a right angle with the body. Keep the knees straight and the body above the hip-joint on the ground undisturbed.
Step 2
At this stage, still exhaling, raise the arms and hold the waist and push the body up as far as possible. Put all the body weight on the arms and rest on the elbows, with the legs thrown upwards.
Step 3
When this position is firmly secured, by careful manipulation, make an attempt to shift the hands slowly towards the waist, with the fingers extended to the back of the hip-bones and the thumbs pressed lightly on both sides of the navel.
Step 4
Set the chin in the jugular notch and place the full weight upon the shoulders, the neck and the back of the head (final position). Complete the above steps in 4 seconds, while exhaling.
Step 5
Maintain this pose as long as convenient, but not longer than two minutes, breathe normally slow, rhythmic and natural.
Step 6
Return to starting position: slowly bend the knees and then gently lower the hips towards the mat, supported by the hands in 4 seconds, while inhaling.
Step 7
Release the hands from the back and assume the starting position.
Step 8
Take a few deep breaths and then rest in savasana, breath normally.

Strengthens your shoulder and neck muscles.

The action of holding your whole body up builds strength in your core and your whole torso.

Back pain or spine injury

Throat or ear infection (this pose might cause discomfort) 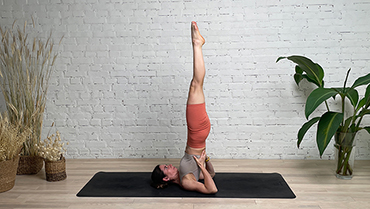 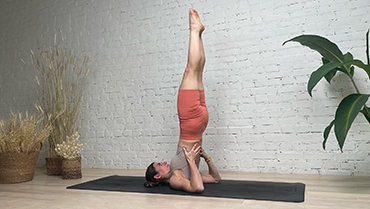