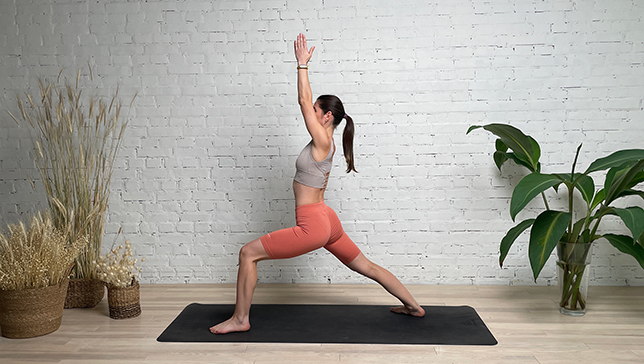 As per Hindu Mythology, ‘ Virabhadra’, was the name of a ‘Warrior’, created by Lord Shiva. Hence this pose comes from the creation of the fiercest warrior by Lord Shiva and so the name goes as ‘Virabhadrasana’ or ‘Warrior’ Pose. In Sanskrit ‘Vira’ means ‘Hero’ ‘Warrior’ ‘Vigorous’ and ‘Courageous’, and ‘Bhadra’ means ‘good’ ‘auspicious’. Considered to be a powerful posture replicating the power of a warrior, this pose is the first variation amongst the many under warrior poses. The importance of practicing this pose is emphasised clearly in all schools of yoga as it forms a part of the standing poses which includes balance, stability and stamina. To balance the body with feet more than hip distance apart and raising the arms above your head while gazing at them, requires one to connect the body with the breath. Practicing the alignment of the feet and the knees, along with the torso marks as a great pose to add beauty to one’s body.

Warrior Pose I is considered a base pose as warrior pose i variations can be derived from this pose.Warrior Pose I helps boost energy in the body and hence can be included in flow yoga sequences.

Step 1
Begin in Tadasana (Mountain pose) with your feet together and arms alongside your body. Distribute the weight evenly in your feet. If you have a hard time staying balanced here stand with the fee hip distance apart and parallel to one another.
Step 2
On an exhale step your left leg about 4 to 5 feet in back of you and turn your back foot at about a 45 degree angle so that the toes are pointed towards the top left corner of your mat. The front toes are pointed forwards and are parallel with the front edge of your mat.
Step 3
You want to have a heel to heel alignment between the feet. Keep the hips turned towards the front of your mat like two headlights pointing forward. *Modification: For more stability you can walk the right foot out to the right a few inches.
Step 4
On an exhale, bend the right knee to 90 degrees so that the knee is directly over the ankle and the shin is perpendicular to the earth. Distribute the weight evenly through that front foot as you lift the inner arch and root down through the corners of the feet.
Step 5
Engage the quad of the back leg. The leg should be straight without locking out the the knee. Root down the outer edge of the back foot into the earth as you press into the big toe mound.
Step 6
On an inhale, lift the arms up above head. Broaden the collarbones. Rotate the triceps or pinkie side of the hands in towards one another as you draw the shoulders away from the ears. Your fingers are actively reaching up towards the sky. Arms are either parallel to one another or palms are pressing together.
Step 7
Lengthen the tailbone down towards the earth as you draw the navel gently in and up towards the spine. Tuck the lower ribs in. **Don’t dump into your lower back. It is very common and easy to over arch the lower spine, which may lead to lower back soreness or injury. This is a natural tendency you want to avoid, so it is important to continue to focus on drawing the navel in and up.
Step 8
Gaze forward and slightly upward. Make sure not to crunch the neck. Root down into the earth as you lift up to the sky.
Step 9
To get out of the posture, straighten the front leg, lower the arms and come back to mountain pose. Repeat on the left side.

Strengthens the shoulders and arms, and the muscles of the back

Strengthens and stretches the thighs, calves, and ankles

Students with shoulder problems should keep their raised arms parallel (or slightly wider than parallel) to each other.

Students with neck problems should keep their head in a neutral position and not look up at the hands. 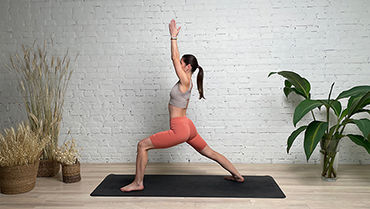 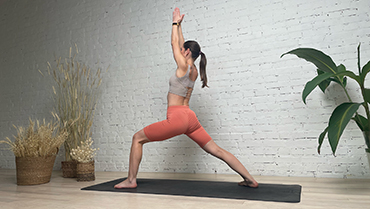 Find a comfortable and stable stance to start. To prevent the front knee from collapsing in, wrap the muscles around the outer hip to externally rotate the leg.To prevent the ribs from flaring out, engage the core and draw the tailbone down towards the mat, which also keeps the lower back long.